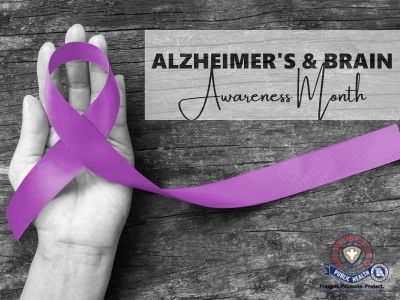 Worldwide, 55 million people are living with Alzheimer's and other dementias. The Cape Girardeau County Public Health Center joins the Alzheimer's Association's Alzheimer's & Brain Awareness Month to spread knowledge in June. The more that people know about Alzheimer's, the more action we inspire.

Alzheimer's is a brain disease that causes problems with memory, thinking and behavior – it is a specific brain disease that accounts for 60-80% of dementia cases. Dementia is a general term for a decline in mental ability such as loss of memory, reasoning or other thinking skills.

The brain has 100 billion nerve cells (neurons). Each nerve cell connects with many others to form communication networks. Groups of nerve cells have special jobs. Some are involved in thinking, learning and remembering. Others help us see, hear and smell.

To do their work, brain cells operate like tiny factories. Cells also process and store information and communicate with other cells. Keeping everything running requires coordination as well as large amounts of fuel and oxygen.

Scientists believe Alzheimer's disease prevents parts of a cell's factory from running well. As damage spreads, cells lose their ability to do their jobs and, eventually die, causing irreversible changes in the brain.

Symptoms of Alzheimer's disease worsen over time, although the rate at which the disease progresses varies. On average, a person with Alzheimer's lives four to eight years after diagnosis, but can live as long as 20 years, depending on other factors.

Visit Stages of Alzheimer's to get an idea of how abilities change once symptoms appear. Caregivers of people with Alzheimer's can also be challenging. Visit Stages and Behaviors to learn about behavior changes with helpful resources for caregivers.

Memory loss that disrupts daily life may be a symptom of Alzheimer's or other dementia. If you notice these 10 warning signs and symptoms, don't ignore them – schedule an appointment with your doctor.

If you notice one or more signs in yourself or another person, take action. Get checked. Early detection matters. To learn more about warning sings and symptoms, click here.