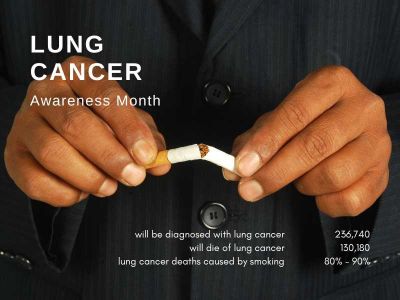 November is Lung Cancer Awareness Month and a time to stand together against the leading cause of cancer deaths among both men and women in the United States (CDC).

There are several natural body changes that happen as you get older that may cause a decline in lung capacity. Muscles like the diaphragm can get weaker. Lung tissue that helps keep your airways open can lose elasticity, which means your airways can get a little smaller. Also your rib cage bones can change and get smaller which leaves less room for your lungs to expand. To learn more about how lungs work and its changes with aging, click here.

A decrease in lung function is a normal part of the aging process but it's important to be aware of the risks and symptoms involved in lung cancer. If you notice any sudden difficulties in breathing or shortness of breath, talk to your doctor right away.

The American Lung Association's "State of Lung Cancer" report explores how lung cancer varies by state. It does this by analyzing key lung cancer indicators including incidence, survival, stage at diagnosis, surgical treatment, lack of treatment and screening rates. This is where Missouri stands:

Missouri falls into the top tier for percent of patients receiving no treatment. Some patients do refuse treatment, but issues such as fatalism and stigma can prevent eligible patients from accessing treatment that may save or extend their lives. All patients should work with their doctors to establish a treatment plan and goals.

Smoking is the most common cause of lung cancer. In fact, it causes 80-90% of lung cancer deaths in the United States (CDC). Other risk factors include being:

When smoking is combined with other risk factors, the risk of lung cancer is increased.

If lung cancer is caught before it spreads, the likelihood of surviving 5 years or more improves to 60 percent (based on early-state lung cancer stats).

These are ways you can lower your risk of lung cancer:

It's also generally important to minimize your exposure to outdoor air pollution, avoid respiratory infections that can damage the lungs, get regular medical check-ups, and exercise.

Your health is important! The Cape Girardeau County Public Health Center stands with you in spreading awareness of lung cancer and the things you can do to keep your lungs healthy.